I switched to a new phase in my lifting program on Tuesday. I had almost entirely brand new exercises to learn and perform, including variations on my main lifts. Surprisingly, it was really annoying. The efficient routine I had down pat was all out of whack. I wasted time looking for equipment in the gym, figuring out how much weight to use, and checking the coaching cues for new exercises.

Why was I so annoyed? Change is necessary to progress,  since the body adapts to what you’re throwing at it in the gym. Thinking through my reaction to the change in my lifting program got me thinking about how I train (or don’t) in the climbing gym, and I thought I’d share my strategies in today’s post.

I don’t follow a specific program, but I never walk into the climbing gym without a goal for the night in mind. Here are 3 training tricks I’ve used to give myself direction and purpose in my gym sessions.

These will probably be most useful for intermediate climbers. If I’m climbing 2 days a week, I’ll do one of these sessions one day, and then use the other day for a more chill, have-fun-and-just-climb-with-good-technique sort of workout.

5.hard-ish should be a grade that you can usually climb relatively smoothly, but which challenges you, i.e. if you’re tired, or unfamiliar with the route, you might have falls. Climb well and focus on your technique, trying to keep a consistent level throughout the session. Aim to complete 10 routes that are 5.hard-ish or harder by the end of the session with no falls. This strategy works well for bouldering or for route climbing. It allows you to get volume while focusing on climbing well.

END_OF_DOCUMENT_TOKEN_TO_BE_REPLACED

There was a point in my life where I devoted a lot of time and energy to thinking about the way I looked. I restricted my eating, except when I ate sweets to assuage the stress of failure to change my body. I worked out with the singular goal of losing weight and becoming skinny.

And it didn’t change the way I looked.

And I didn’t lose (much) weight.

And it didn’t make me happy. 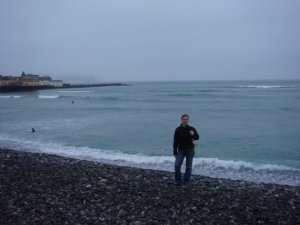 In 2010, looking more or less like I always do, despite a summer of deprivation.

Since then, I’ve grown up a little bit, and I’ve changed my body image philosophy in an important and powerful way. Instead of caring about what my body looks like, I want to care about what my body can do. My training goals are all oriented at challenging myself to get stronger in specific and achievable ways.

I want to be able to squat and dead lift my body weight. I want to push myself on lead by redpointing harder routes. I want to make it to the top of any trail I choose to hike. I want my body to be strong and capable.  Learning my limits and training myself to be stronger has given me the confidence to love my body and myself. It means that I can be impressed with what my body can do, instead of searching for its flaws in the mirror.

The beauty of training to be strong instead of working out to be skinny is that you can see your progress as you go. Each week, on at least one of my exercises, I can go for longer, lift more weight, or do more reps. The little successes in each workout keep me motivated all week long.

Don’t obsess about what you look like. Don’t wish that your body looked like someone else’s. Decide what you want to be able to do, and then train until you can do it.

I want to be the partner who’s always excited about your successes, even when you use my project as your warm-up.

I want to be the partner who brings the best snacks, and the person who shares them freely.

I want to be the partner who doesn’t blame others when things go wrong.

I want to be the partner who shakes it off and says “maybe I’ll get it next time” instead of throwing a temper tantrum.

I want to be the partner who says “I got you. Rest as long as you need.”

Good climbing partners are hard to come by. Climbing with Meryl in the RRG.

I want to be the partner who bullies us into doing one more route.

I want to be the partner who encourages you to take one last try.

I want to be the partner who saves the gear if you don’t want to try again.

I want to be the partner that makes you laugh all the way down the trail and up the wall.

Instead of going to church, I headed up to Lincoln Woods with a friend to do some bouldering. Happy Easter everyone!

Ouch! The coarse texture of the granite really does a number on your hands.

There is one photo from Kentucky which perfectly illustrates my two biggest outdoor climbing weaknesses at the moment–footwork and clipping stances. 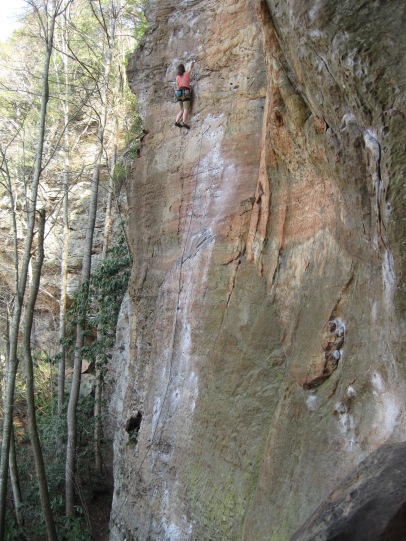 Check out my feet. I look like I’m posing for a photo in a minidress, not making a clip. My feet are awkwardly placed, and my left arm is supporting most of my weight in a locked-off position.

I’ve been working on improving my footwork recently, but all of my training has been indoors. I was surprised by how little that indoor awareness transferred to outdoor climbing. Feet are harder to see outdoors, and there are more options than indoors. To correct this weakness, I can bring the same training tactics I used indoors to the outdoors. Downclimbing, drills, and focusing on including feet in visualizing the route ahead of time should all help some.

A second major weakness is clipping. My biggest climbing fear is falling in the process of attempting to make a clip, with a ton of slack in the system. I saw another climber deck trying to make the 3rd clip on a route in California this March. He was okay, but it was really scary for his belayer and everyone who witnessed the fall. Higher up on a route, a hard catch on a long fall could re-injure a previously sprained ankle if I were unlucky.

I think the most important ‘fix’ for these weaknesses is going to be getting more outdoor practice. I don’t get to climb outside very often, but my trip to Kentucky did allow me to get a lot more time on the rock. I led 17 routes in 4 full days of climbing, with 11 of those routes being redpoints or onsights. I also top-roped an 11a, which is the hardest route I’ve ever gotten on outdoors. It wasn’t quite the volume I was hoping for–but there will be another trip!

Now that I’ve spent an entire post complaining about the things I suck at, the good news  is that I did manage a flash of To Defy the Laws of Tradition, 5.10a! One of my goals for the trip was to redpoint 5.10a, so I was super psyched by the send. The route is an uber-classic for good reason–perfect rock, aesthetic climb, and fun moves.

This week, I finally got my act together and tried out band assisted pull-ups.

(this cannot be understated. I have run around telling all my friends)

Unlike negatives, band-assisted pull-ups don’t make me feel like I’m too weak to do ‘the real thing.’  Second, unlike variations with the feet elevated, they are pretty easy to set-up in the large college weight room where I do most of my lifting. Third, they don’t make me feel like a doofus. Most of the time when I’m in the weight room, I’m the only girl there. Half the time, I’m the only one using the squat rack (for squats), and I’m one of two people I’ve ever seen do deadlifts. I try not to look any more out of place in the weight room than I already feel. When I start training somewhere I feel more comfortable, or at times of day when there’s no one around, I’d be really tempted to check out these progressions. For now though, band-assisted pull-ups are more than enough to keep me happy until I can manage one of the real thing.

I was looking for a CC image of a chick doing pull-ups, and ended up with this gal. A cursory stalk of her flickr pictures suggests she's pretty badass.

Finally, and most importantly, because they require very little equipment, I can do band assisted pull-ups any time I want!  I borrow an iron gym type thing from my friend across the hall, pop my band on there, and hop to. I combine it with hanging ab exercises for a nice, short, climber-specific work outs which I can use to start the morning or break up a long evening of work.

I do as many as I can manage of each exercise for each set. With the band-assisted pull-ups, my current max is 2,  but I can almost always do 1 with adequate rest in between sets. I start with the pull-ups, then do a set of the straight leg abs. More pull ups, then a set of the bent leg abs. I repeat this until I’ve done three sets of each type of abs, then grin at myself in the mirror like an idiot. Try it out!